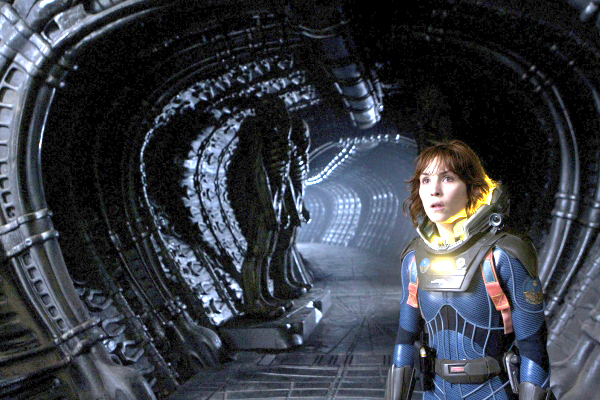 Just what exactly do we have here! Are they suits? Statues? If they're suits then what goes in them and how do 'they' get into them?

I wonder if this is the end of the corridor that leads into the room we've all seen in the trailer with the Space Jockey chair in it?

Judging by the distance Noomi is away from them I'd say that the suits are about 7' tall. Now this leads to even more questions, because as you'll recall, the Space Jockey in ALIEN was gigantic, more like 25' in height. So, what are these things in the corridor??

Look at their feet, they look more like boots than 'feet'. Which makes them more likely to be suits. Are the suits made in the image of their maker?
Posted by Studio Gekko at 2:39 PM 1 comment:

Looking at the trailer in Hi Def again and I noticed something that I missed!

These two red balls! Looking at the Apple trailer in 1020p and pausing it and sliding the slider back and forth I noticed that this astronaut is watching one of the two balls as it tracks from left to right. The balls are emitting a red laser, you can see this on the astronauts chest and helmet and near the top arrow and bottom right corner.

I'm guessing they are scanning/mapping the internal dimensions of the cavern they are in? As far as technology goes, this would have to be the most advanced I've seen yet. Reason? Well, what is powering them? How are they able to float in mid air like that?

Next is the Space Jockey ship. 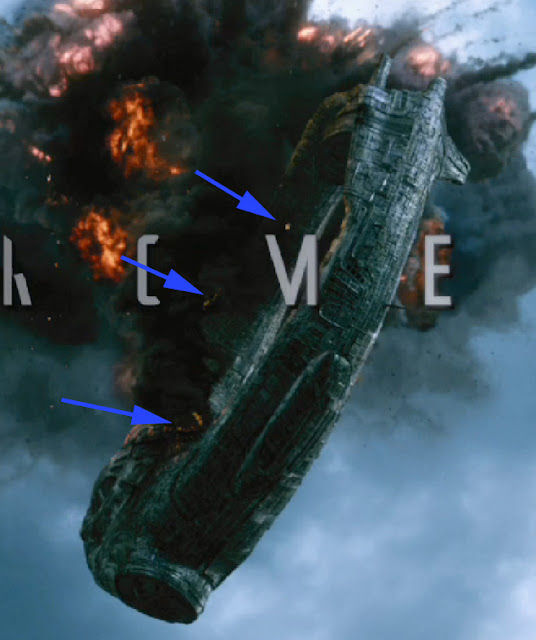 Looking at the footage again I've noticed that not only is there fire coming out of the ovoid openings at the front (where the crew from the Nostromo gained access in ALIEN) but also along the left 'arm' in various places. So the ship is a lot more damaged than I first thought, with fires at its centre and entire left side.

On better examination the second word couldn't be Magellan or Megellan. I'm pretty sure the first word is WHEYLAND but the second word is MEGH... or MEGA....... What could it be?

And is the drop ship parked in the same spot in the above shot as this one below?

The distance of the 'object' in the first image looks quite close, whereas the second image with the road, the distance from the dropship looks further. I realise it could just be because of camera focal length, or something like that. But I like speculating!
Posted by Studio Gekko at 4:29 PM 4 comments:

I’ve gone through the teaser trailers and written down Ridley Scott’s quotes. I think they tell a lot, yet give us nothing! J Here are my thoughts.


And thank goodness too! It’s been far too long! He seems happy to be back doing Science Fiction.


“It’s epic. Not by just definition of the scale of sets. It’s about the very grand ideas and notions. The surprising things that will appear to be small and yet will be enormous.”


Wow. All of it is in that quote! But just what could it be? What is it that could be considered insignificant and yet is everything? I’d say that it’s not the Space Jockey or its ship. So, something else? The chest burster perhaps? The eggs?


“The surprise is in the story.”


I’d say whatever the surprise is, we haven’t seen it in the trailer yet. Ridley likes surprises. He likes to get people to think. And we’re certainly doing that!


“It’s all about everything.”


I’m guessing this is to do with the genesis of human life?


“I’m thrilled to be doing another science fiction…..”


Generally if one is happy doing what they do, they do it well!


“The cast find an establishment which is not what they expect it to be. What we find in it, dangerous elements that in a heartbeat are capable of eviscerating all of them.”


Now, not being an English scholar, I had to look-up “eviscerating” because it is a word I’d never heard before and I must say I was a bit surprised by what I found!


Pronunciation: /i-ˈvis-ə-ˌrāt/
Function: vb
-at·ed ; , -at·ing ; vt 1 : to remove the viscera of
2 : to remove an organ from (a patient) or the contents of (an organ)
vi : to protrude through a surgical incision or suffer protrusion of a part through an incision


Just what the hell happens to them in that “establishment”!


Also, if the “establishment" is not what they expected it to be, just what were they thinking it was going to be? Was what they find on earth a trap to lure them back to our maker to be toyed with??

Prometheus is certainly creating a lot of commentary and theories over the Internet! Based on what I've been reading and what people have sent to me I have discovered more things to look at, discuss and wonder about.

There is a lot of things to see in this room. Let's go through them:

A. These look a lot like galaxies. Are they systems that the Space Jockey's are "fixing" or developing?

B. Entry. Would this be tall enough to allow Space Jockey entry?

C. A chair. Though too small for a Space Jockey. It would fit that humanoid we've been speculating over.

D. "Goo", well that's the best name I've got for it at the moment! Looks like it 'comes to life' when operational. What could it be?

The red circle surrounds what I'm speculating could be the Space Jockey's Homeworld. 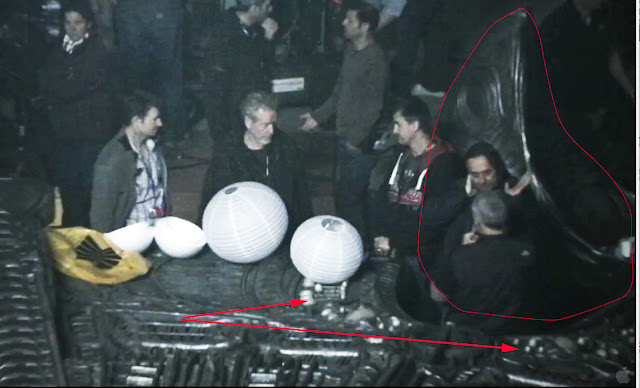 Here's that chair again. Notice that it's 'human' size. The red arrows point to what looks like a control panel. I have seen an image, sent in to me by Frank from Norway, where what we see here as white egg size shapes, glow a luminous yellow-green! 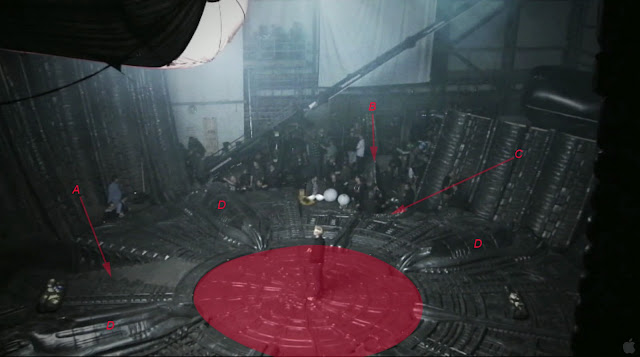 Obviously the red circle is the platform from which the Space Jockey chair rises out of.

So if the chair is human size those sleeping pods are at least double the length of a human!

Here we see the back of the chair (red circle).

Now, here we have something that I hadn't noticed initially and was pointed out to me by Frank from Norway! On the left it looks like the sleeping pod is either open or empty. Also, on the right we see the chair. So, that puts this humanoid individual standing just in front of the control panel. As we've seen from the images above, the chair is human size, so, so is this guy. He may well be tall, even 7 foot tall, but not a giant by any means.

Question is, has he come out of the sleeping pod on the left? Questions, questions?! 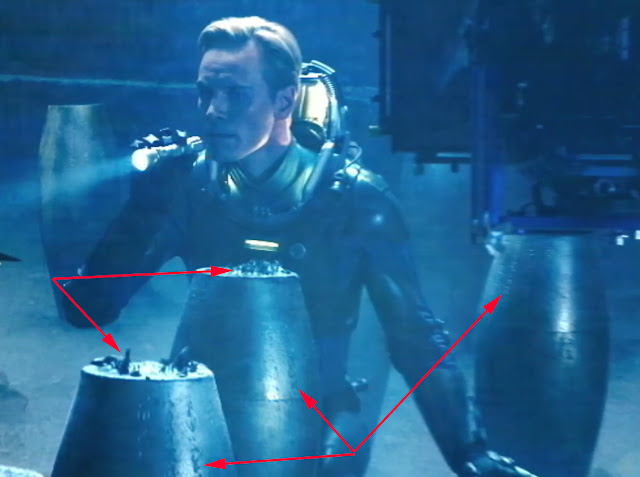 My, my, what here we here! Two of the crew members are studying the head/helmet/ skull. You can just make out an eye socket (blue arrow is pointing to it). Over on the right is the body/suit. Now this image just leads to many questions and no answers!

Why is the head separate from the body?

If it is a body, who/what has killed it?

Why is it dead?

One thing is certain! It is BIG! I recall reading somewhere that the Space Jockey in ALIEN would have been 30 feet high? Well this one doesn't seem as big. A female perhaps? Or a juvenile? 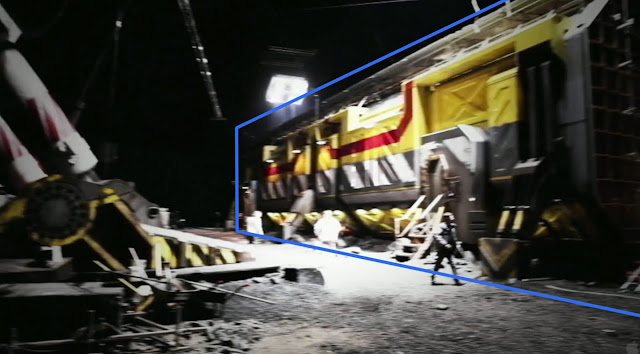 Whether it's the Prometheus we've seen in the trailer or it's the Megellen. One thing that I've wondered about is if this 'pod' we see outlined in blue, is something that has descended down from the main body of the ship and is still attached to the ship, or if is like the cargo pod on the Space 1999 Eagle transporters, and can be dropped off and left. Could the Dropship have more than one of these pods?

Imagine if the dropship drops off a couple of these things then goes back to the mother ship, leaving the explorers on their own down on the planet while the mother ship supports from orbit? 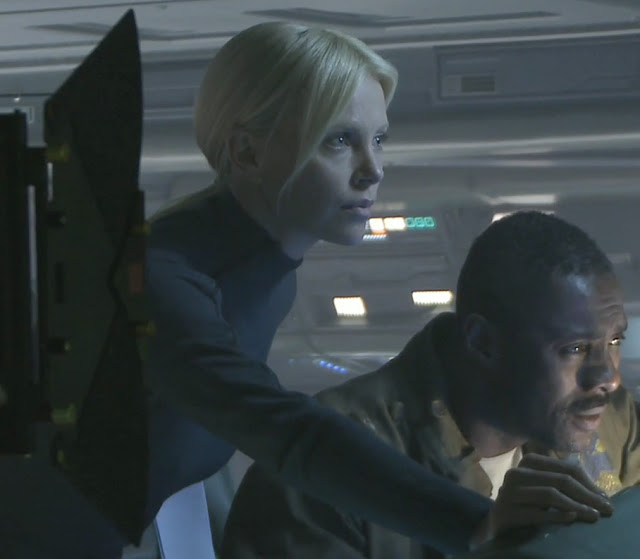 Now, I've included this image for more than the obvious reason that Charlize looks amazing in this shot! But, also because this shot seems to show the command element of the crew watching from the command ship. Which is either landed on the planet, or in orbit. Is there more than one expedition going on at once?

At some stage Charlize is running away from the crashing Space Jockey ship with Noomi. So she leaves the command ship at some point. Is that when we see her running down the corridor and into the escape pod??

What is on fire here? The crew are desperately trying to burn something, but what? 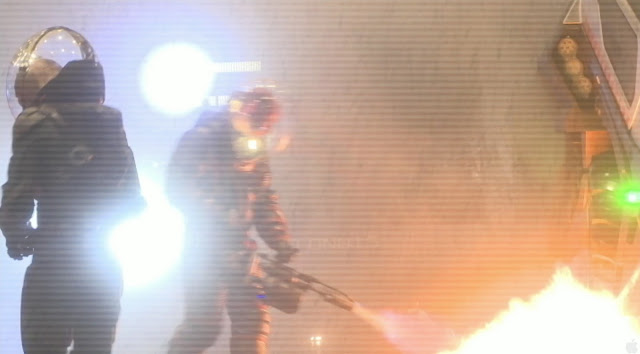 Something small, running around at ground level? 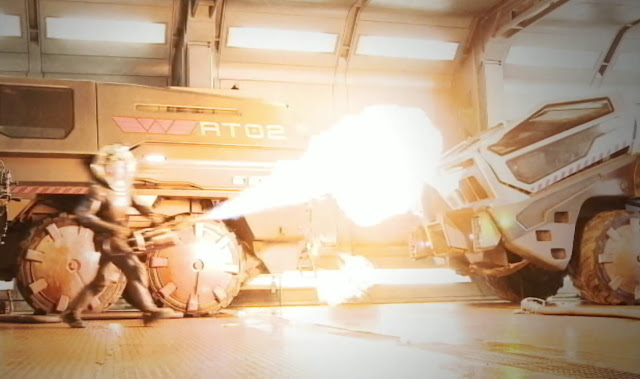 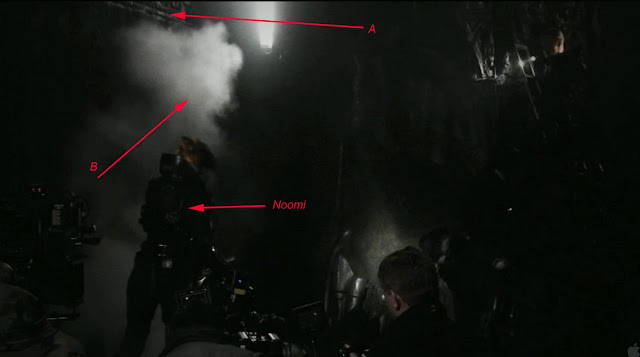 Watching one of the teaser trailers I noticed that there is a door rising up in this scene (A). Followed by a blast of 'steam' (B). A sealed room perhaps??

I generally look like this at the Dentist! Noomi is not happy here! Has she been impregnated?? 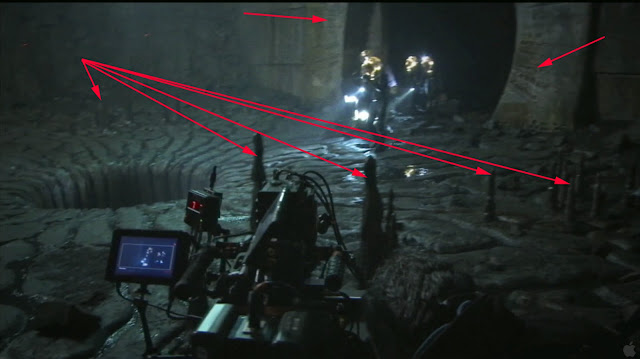 What the hell is with that hole! That is very creepy looking! What is down there? Why is there water running into it?

Also notice the stalagmites, similar to what we see in the shot with the vehicles heading back to the dropship. And more writing on the entrance door. 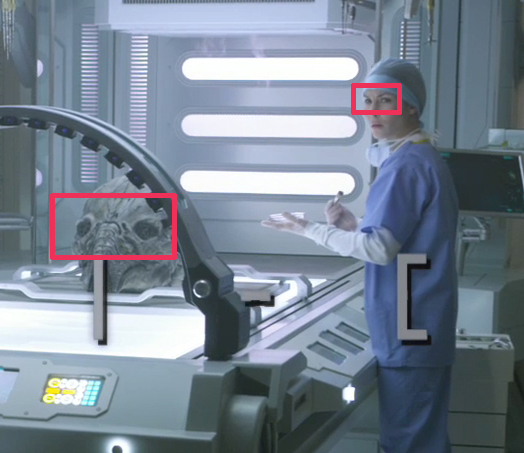 Some people still seem to think this is a helmet. Maybe they're right. However, just to illustrate my point. If it belongs to the humanoid we see standing next to the Space Jockey chair the eye sockets would be way too wide for a humanoid head. I'm still going with skull.

Anyway, that's all for now.